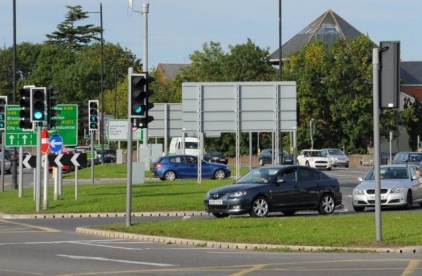 Herefordshire Council is asking local residents to have their say on a review of transport schemes such as the Hereford bypass, removal of traffic lights and electric buses.

The transport strategy review will include an assessment of the proposed Hereford Bypass and Southern Link Road, alongside alternative options that could deliver improvements more quickly and at lower cost.

This will include the possibility of a new river crossing, removal of traffic lights on key routes, an electric bus fleet for the urban bus network and improvements that provide safer routes for pupils to walk and cycle to school.

Councillor John Harrington said: “A rigorous review of the major road projects planned for Hereford, and consideration of alternative options, is essential to ensure the best use of public money in alleviating traffic problems in the City now and for the future.

“There is a lot of untapped local knowledge out there that we would like to harness, many people have an idea for improving a particular junction or more broadly.

“We are inviting everyone who works in, lives in and visits Hereford to take part in the review by sharing their experience of travel and transport in the city.”

Feedback can be given by going to the website travelinhereford.commonplace.is

The review is expected to be completed by 31 July 2020 and feedback received by 31 March 2020 will be considered in the review.

“Any measures taken to address travel issues, such as congestion and poor air quality, must be positive for Hereford and the whole county, and are consistent with the council’s declaration of a climate emergency”, Cllr Harrington added as he expressed concern for inherited schemes, following the election of the new administration last May.

“As elected Members, we need to ensure the best use of tax payer money to improve the lives of Herefordshire residents. We as a new administration have serious concerns over the way that road projects have been managed so far and there is a legitimate need to review this.

“We expect to see an increase in Government funding opportunities for the development of public transport schemes in line with the climate emergency declaration.”

A number of transport and travel schemes will continue, including the development of plans for a high quality transport hub at Hereford railway station and improvements to public spaces and facilities for cyclists and pedestrians across the city.