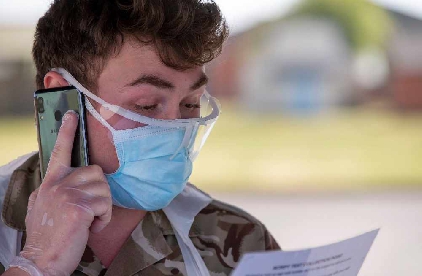 The shortage of available coronavirus tests in Herefordshire is due to swabs being allocated worse affected areas elsewhere in the UK, county health bosses say.

The mobile testing unit at Merton Meadow has been deployed every day since August 14.

But in recent weeks, dozens of residents have had huge difficulty in booking a test in Hereford and some have been told to go almost 100 miles away to have one.

Recent reports via the Department of Health and Social Care, suggest that the testing unit is operating at full capacity daily.

Once this is reached, bookings for the site will temporarily closed although slots for bookings may reopen throughout the day.

Public health officers say this is due to the testing capacity allocated to Hereford not being the maximum it can deliver.

They say this is in line with the current strategy of diverting testing capacity to areas that are experiencing significant increases in community transmission.

“There was a particularly distressing account of a toddler who was very ill having to be driven to Merthyr Tydfil as the nearest test centre,” he said.

“And other residents who are concerned about relatives in care homes.

“Given that the council has responsibility in some key areas, what plans are there to improve testing capacity in Herefordshire?”

“But the information that we have is that it is running to 100% capacity and the reason for that is that nationally the laboratory capacity is being deployed to those areas where there is greater pressure,” she said.

“Therefore, the number of swabs that are allocated to mobile testing units outside of those priority testing areas has been reduced.

“So even though we are running to 100% that isn’t as many swabs as could be done.

“We write on a regularly basis to say actually something needs to be done about this.

“We are planning on increasing the offer across the county through the establishment of local testing sites which would be walk in offers in the market towns.

“But at the moment until we get a greater allocation of the laboratory capacity for the national system it puts us in a difficult position to roll that system out.”

She said they have also commissioned a swabbing service from Wye Valley NHS Trust.

“They have increased their laboratory capacity through access to laboratories in Birmingham.

“They will help us in individual circumstances to be able to resolve some of those situations.”