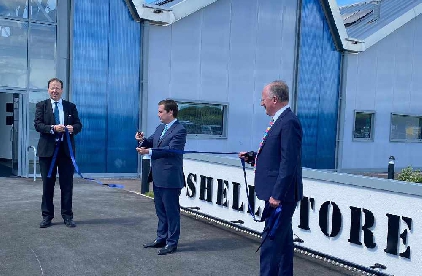 Hereford’s business incubation and innovation centre was officially opened by the Secretary of State this afternoon.

The Shell Store has a rich history, having been built in the First World War and used as an ordnance site during the Second World War. The project has developed commercial space within the existing building footprint (it is not a listed building), retaining much of the original factory including its steel roof structure.

The £7.3m refurbishment of the building has established more than 2,100 sq metres of employment space, with room for new and growing businesses to set up and expand alongside facilities for development and innovation.

The Marches Growth Hub, Hereford Enterprise Zone team, and Herefordshire and Worcestershire Chamber of Commerce will be located on site providing businesses with access to advice and support services.

Robert Jenrick MP, Secretary of State for MHCLG, said: “If you think back a decade ago, this was a derelict brownfields site and behind me was an incredibly historic building but one that was in poor condition. What has been achieved here is phenomenal. Half of the site is now full of businesses, and that is creating well-paid, interesting jobs for local people and is attracting business into the wider region as well.

“We want to make sure we build back strongly from the pandemic, and this building will play a part in that because it provides really high quality space for businesses, conference spaces, and spaces for incubation of new businesses. I think the future is very bright for the Shell Store.”

The project has been funded by the European Regional Development Fund (ERDF), Herefordshire Council and a loan from the Marches LEP’s Marches Investment Fund.