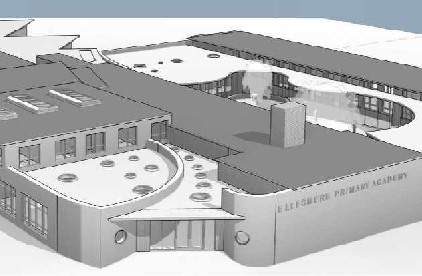 A primary school is set to undergo a major regeneration after plans for an extension and a new sports pitch were given the go-ahead.

The Ellesmere Primary Academy will also get a new car park after Shropshire Council granted permission for the project.

Charlotte Murchington, planning officer, said: “This application seeks planning permission for the erection of two storey and single storey extensions to existing school building, relocation of existing single storey building and the creation of a new parking area and all weather sports pitch.

“Ellesmere Primary School is a purpose-built site set back off Elson Road.

“The site includes a sports pitch to the front of the school, a grassed soft play area to the west and an area of hard-surfaced playground immediately to the rear of the main school building and south wing.

“The buildings date from the 1950s and the accommodation is set over several blocks and demountable classrooms.

“In September 2016, Ellesmere Primary School converted to an academy and joined the North West Academies Trust.

“The school serves a rural catchment and is the largest primary school in the town.
“There are currently 410 pupils on roll at Ellesmere Academy.

“The proposed works would allow the school to have a capacity of up to 420 pupils.

“The proposed extensions and alterations to the school will allow it to accommodate its projected growth and create a school which can adapt to its future requirements, in a sustainable manner. The scheme is therefore supported in principle.”

In its application, the school said: “Ellesmere Primary Academy is to be regenerated.

“The school suffers significant shortcomings in terms of the performance of the physical fabric.

“In an era when energy costs have risen significantly and are predicted – despite the present economic lull – to continue to rise, placing increasing importance on matters of energy conservation is vital.

It added: “To address these shortcomings, Jig has received a design brief to create a more pleasant and better connected school.

“The existing building has been developed haphazardly over a period of time and has developed several issues which cause functional problems with both the day-to-day running of the school, its lifetime running costs, access around the site and its overall longevity.

“The proposed scheme seeks to address these issues and provide a building suitable for learning and community activities within a functional and pleasant environment.”