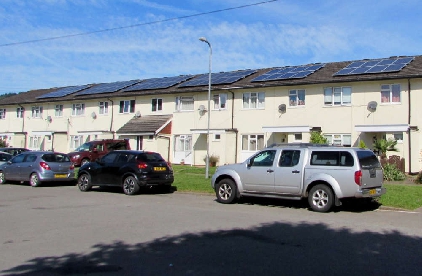 Monmouthshire is facing a shortfall of 468 affordable homes per year, a council report shows.

The scale of the challenge to provide enough affordable homes in the county has been outlined in a new local authority prospectus.

As of June this year, there were 2,400 people registered on Monmouthshire’s housing waiting list, with “significant numbers of homeless households in temporary accommodation”, the prospectus says.

At a meeting of the county council’s adults select committee on Tuesday, Cllr Roger Harris questioned how many affordable homes the council is expecting to build towards the shortfall of 468 per year.

“I can’t see anything in the report that says how we are going to achieve that,” Cllr Harris said.

The meeting heard that last year the council delivered 146 affordable homes, and this year about 80 are projected, though it is hoped this number will increase.

Cllr Harris called on the authority to progress plans to set up its own building company to help address the shortage, a scheme which the council announced it was considering in December.

Cllr Maureen Powell voiced ‘frustration’ over housing developments not going ahead due to local opposition, citing a scheme in Raglan for 111 homes, including 39 which would have been affordable as an example.

This is much higher than the average house price in Wales, which is £216,152.

Cllr Martyn Groucutt asked how the increase in house prices was impacting people in the county.

Mark Hand, the council’s head of placemaking, housing, highways and flooding, said the authority’s Replacement Local Development Plan aims to help tackle the issue, which he said is “one of the huge challenges” facing the county.

The proposed plan would provide 2,450 affordable homes up to 2033, with 731 731 of these already having planning consent, Mr Hand said.

The meeting also heard that the number of households in temporary accommodation has increased to 147, including 73 in bed and breakfasts.

Ian Bakewell, the council’s housing and regeneration manager, said the rise was the result of changes in Welsh Government legislation.

Before this the council normally had around 10 households in bed and breakfast accommodation, the meeting heard.

Mr Bakewell said the council was trying to increase the amount of temporary and permanent accommodation available, as well ramping up its preventative work.