Resurfacing works on A40 for next 17 weeks 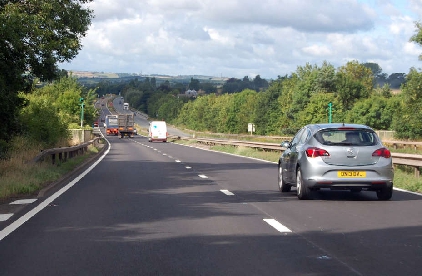 © Copyright Julian P Guffogg and licensed for reuse under this Creative Commons Licence.

Highways will begin essential work on the A40 in Herefordshire from Monday.

Resurfacing work is set to get under way and the road markings repainted between the junction of the A40/A4137 and Wilton Roundabout near Ross-on-Wye.

In addition, there will be maintenance work carried out on the rockface to prevent rock falls or loose debris dropping directly onto the carriageway.

Taking place between 27 September and 21 January, the work will be delivered in phases along the A40 to minimise disruption as much as possible.

To ensure the safety of workers and road users, some lane and road closures will be required.

National Highways Assistant Project Manager, Jasmine Maumi, said: “We appreciate that roadworks can be frustrating but once this important work is completed drivers will benefit from a smoother and safer road surface, clearer markings and assured that action has been taken to tackle the risk of rocks or debris falling onto the carriageway.

“Drivers are advised to leave more time for journeys and avoid this area if possible during the closures.”

Work will take place from Monday to Friday and will mostly be carried out through lane closures but the following full carriageway closures are needed:

There will be no restrictions on the road between Thursday 23 December 2021 and Tuesday 4 January 2022.