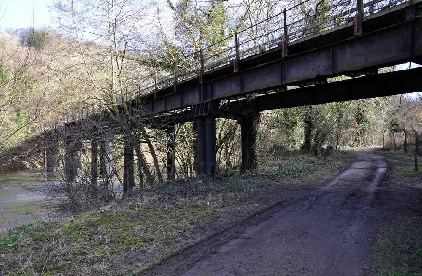 The Gloucestershire section of one of the UK’s longest foot bridges is still without public rights of way protection three years after a bureaucratic blunder was discovered.

More than 20,000 walkers use the 136-mile Wye Valley Way every year but the Black Bridge section which connects Lower Lydbrook with Welsh Bicknor in Herefordshire is not registered as a public right of way.

Gloucestershire County Council did not register it as such when the footpath was established in 1981 but the Herefordshire half of the bridge was registered as a public right of way by Herefordshire Council.

This oversight came to light when Gloucestershire County Council agreed to temporary repairs to reopen the bridge after a lottery grant bid for more permanent repairs was rejected in 2018.

While the bridge is currently open, many residents fear the lack of legal protection puts the route at risk of closure.

And councillors say they are growing frustrated with what should be a straightforward process of registering the footpath.

Forest of Dean District Councillor Sid Phelps said: “I’m patient but how many years does it take?

“It’s frustrating. We’ve been waiting about three years for this. This kicking the can down the road is not good enough.

“It’s annoying that every six months I ask them to get the same commitment with no end in sight.

“If we’ve got a public right of way across the bridge it’s going to be much more difficult to let the bridge go into disrepair.”

Gloucestershire County Councillor Graham Morgan, who sits on the commons and rights of way committee, says work to register the footpath should be speeded up.

“It’s a very important link for walkers so they really should make a concerted effort to get it sorted,” he said.

“I know the process is long and very thorough. I wouldn’t want it to be any other way but it is a long delay.

“It’s something that we should be getting to the bottom of and make sure it is speeded up a bit.”

A spokesperson for Gloucestershire County Council said they remain committed to recording the route but progress has been marred by delays.

“The legal process for officially recording the public footpath rights across the old Stowfield viaduct/Black Bridge in Gloucestershire has been delayed by a nearby public footpath diversion and then by the Covid-19 pandemic.

“The county council remains committed to recording the route and is working behind the scenes towards that aim.

“The walkway installed in 2018 continues to be available for walkers to cross the river without a long detour.”