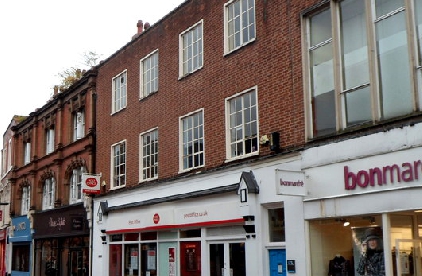 Developers want to change the use of the upper floors of Hereford’s former post office building into seven flats.

Terry Macey has submitted the plans to Herefordshire Council which include retaining part of the existing ground floor as retail space.

To the rear there would be two apartments with another five on the two floors above.

Architects working on the scheme say the proposed layout of the ground, first and second floors will use the existing footprint and the building will not need significant structural alterations.

“The design and construction of the proposed works will complement the existing building and will have a negligible effect on the conservation area and nearby heritage assets.

“The reduction of the ground floor retail space will not compromise the shop front or the appearance externally. Similarly the conversion of the first and second floor office space to residential units will have no adverse effects on the buildings appearance.”

Residents have until December 19 to comment on the proposals which planners are expected to consider by January 3.