Plans for The Judge's Lodging Museum in Presteigne are dropped 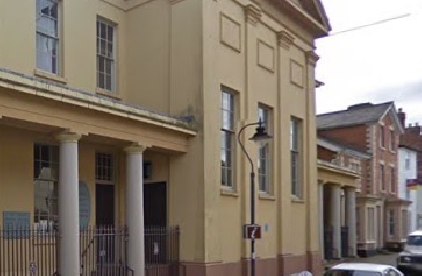 Planning applications for a cafe and holiday accommodation at one of Presteigne’s most recognisable buildings, have been withdrawn.

To make alterations to The Judge’s Lodging Museum, full and listed building planning applications were submitted to Powys County Council in September, 2020.

The Judge’s Lodging Trust who run the museum said that income from the proposals could help secure the long term future of the building.

The Grade II listed  neo-classical building on Broad Street, shows how judges, their staff and prisoners would have lived in the 19th Century.

But documents lodged as part of the application show that there  were concerns that the proposals would change the building’s aesthetic too much, as well as a lacking enough detail.

Dr Cyllene Griffiths of The Council for British Archaeology, brought up the problem of creating two self-contained holiday let flats in the building.

According to the plan this would need the creation of a safe access route along the main ground floor.

Dr Griffiths said: “It is considered that the main corridor is an important architectural feature of the building, and not only has evidential value for retaining the original layout but also communal / aesthetic value for the relevance it has to the visual and mental impact of it on visitors and on those previously brought there for trial.”

She added that in principle the work could be supported, but there was “a great deal of essential information missing from the application,” to allow an informed decision to be made.

Due to this the CBA would object to the plans.

PCC Built Heritage Officer, Debra Lewis,noted in her report, and shared the concerns of the CBA and other consultees.

Ms Lewis said: “Should you wish to determine the application on its current merits whilst supportive of the principle  I would sadly have to recommend refusal.

“It is not considered that sufficient information has been submitted with the application to fully assess the  extent of  the works proposed  to this  grade ll listed building, and the impact on the adjacent listed buildings or the Presteigne Conservation Area.”

Presteigne was the legal centre of Radnorshire for over 400 years.

It was chosen in 1542 as the venue  for the Court of the King’s Great Sessions, in preference to Rhayader where a judge had been murdered in the 1530’s.

Due to this Presteigne also became the administrative county town for Radnorshire.

The Judge’s Lodging was built between 1826-1829, by Edward Haycock of Shrewsbury, and featured a court room, administrative offices, and living rooms.

From the 1830s onwards, it held the Court of Assizes and was part of the legal circuit which saw Judges travel from court to court listening and deciding cases.

But in 1889, the the newly formed Radnorshire County Council chose the thriving spa resort of Llandrindod Wells as it county town.

Legal proceedings continued to be heard in Presteigne up until the Autumn Assizes of October 1970.

Assizes were then abolished by the Courts Act 1971, which established permanent Crown Courts.

Use of the building dwindled and it’s state began to deteriorate.

Eventually the building was transferred to the trust from the council and transformed into a museum.