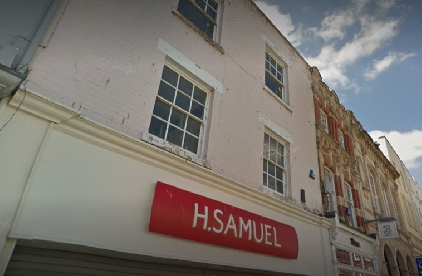 Developers want permission to convert the rooms above the former H. Samuel shop in Hereford into flats.

The High Town building had been used as a shop for many years with a single tenant having use of the entire floor space including the basement and upper floors.

But following the mass-market jewellery chain’s departure from the city last year, the owner now wants to redevelop the building and create four self-contained apartments above the shop.

“Due to the changing requirements in the retail sector, the applicant is seeking to redevelop the upper floors of the building while retaining the retail space on the ground floor,” the planning submitted to Herefordshire Council statement reads.

The plans include building a separate entrance to give access to two of the four self-contained apartments which would be created.

And the two remaining flats would be accessed from the rear of the building.

Residents have until November 19 to comment on the proposals.

County planners are expected to consider the plans by December 16.