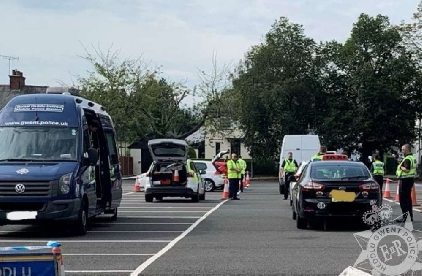 More than 40 vehicles have been stopped in a one-day operation, with some being immediately take off the road.

More than 40 vehicles were stopped in Abergavenny on Friday.

Operation Utah seeks to identify those driving vehicles that aren’t road safe or are being driven illegally.

Local neighbourhood officers, together with our roads policing unit and dog section, joined forces with the Driver and Vehicle Standard Agency (DVSA) and Monmouthshire County Council in the day of action to improve road safety.

PC Elliot Morgan said: "Those who choose to break the law on our roads, driving vehicles that aren’t roadworthy, not only put themselves at risk but other road users too.

“Focused operations such as this see significant results in increasing safety. In this instance, 12 vehicles, which were not safe to drive, were immediately taken off the road.

“Driving irresponsibly, or not maintaining the condition of your vehicle, is not acceptable and, together with our partners, we will continue to target those who break the law in this way.”

If you are concerned about unroadworthy vehicles or vehicles being driven illegally you can call Gwent Police on 101.