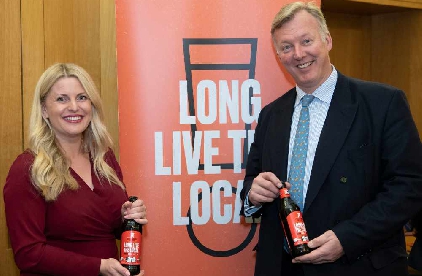 North Herefordshire MP Bill Wiggin has thrown his support behind the Love Live the Local Campaign.

This January, Mr Wiggin joined more than 240,000 supporters of the campaign, including 316 in North Herefordshire, in signing the petition to help local pubs keep their doors open.

Bill commented: “The brewing and pub sector is a vital part of our local economy. It is at the centre of our cultural heritage, hospitality industry and social life of every community.

We have a wonderful 131 pubs and 8 breweries in North Herefordshire, which support 1,318 jobs and contribute £44.5m to the local economy.

However, £1 in every £3 pounds spent in UK pubs goes to the taxman, and each pub pays on average more than £140,000 a year in tax. Alongside Business rates and VAT, Beer Duty is putting these pubs under considerable financial pressure.

Seven in ten alcoholic drinks served in pubs are beer, underlining how directly a cut in beer duty will help pubs.

That is why I am calling on the Government to cut beer tax at the Budget to support the survival of our local pubs.”

Emma McClarkin, Chief Executive of the British Beer & Pub Association, said: “Beer duty has increased by 60% over the last 17 years and now the UK has one of the highest rates of tax in Europe.

When over two thirds of all alcoholic drinks purchased in the pub are beers, a cut in beer tax would go a long way to protecting pubs across North Herefordshire.

We are very grateful to Bill Wiggin for his support for the Long Live the Local campaign, and hope that the Government listens to MPs across Parliament and the thousands of people across the country who are calling for a cut in beer tax to protect our pubs.”