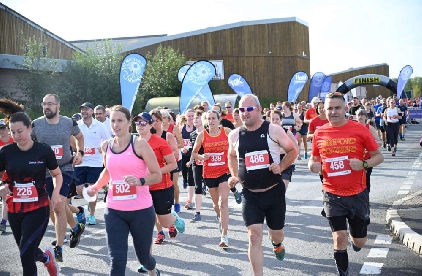 RUN Hereford was scaled back because of Covid restrictions in 2020, but on Sunday almost 700 runners returned in force to the city’s Livestock Market.

The event features 5K, 10K and Half Marathon routes, with all proceeds from entry fees and sponsorship going to St Michael’s Hospice.

“It’s been a while, but it was worth the wait to see hordes of runners at the start line, all raring to go,” said the Hospice’s Events and Community Fundraising Manager, Matt Ashcroft.

“What makes RUN so special is seeing such a variety of ages and abilities taking part, having fun, and raising money for St Michael’s.

“We hope that when our runners crossed that finish line, they felt a great deal of pride, not only in their own personal achievement, but also knowing their effort will help others across our community. Likewise, we’re incredibly grateful to those who have pledged money in sponsorship, and to the dozens of volunteers who helped the day run smoothly.”

Event sponsors Western Power Distribution, who announced a continuation of their support of the event last week, had a group of staff taking part in memory of their former colleague, Daron Hodges, who was cared for at St Michael’s.

“It was a really emotional day,” said Sarah Kent, one of the Western Power employees taking part.

“It’s for such a good cause and we all enjoy running it.

“The marshals along the routes are just fantastic and there’s always such a great atmosphere at the finish line.”