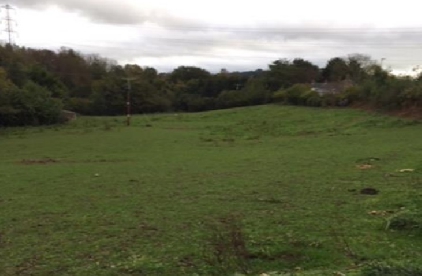 A view of the site where the homes are planned. Picture: Savills/ JR Planning and Development

Councillors have voted to approve contentious plans for housing on a greenfield site in Llantilio Pertholey, Monmouthshire.

The development proposes 12 homes on a field to the east of Hereford Road, which slopes to the River Gavenny.

Welsh Government is currently considering a request for the application to be ‘called-in’ for determination by minsters, and planning permission cannot be formally issued until a decision on this has been made.

The site is located just outside of the Abergavenny development boundary, but planning officers say it is also next to one of the county’s most sustainable settlements.

It also promises to provide 100 per cent affordable housing to help address a shortage in the area.

More than 30 residents have objected, alongside others such as Gwent Wildlife Trust, Llantilio Pertholey Community Council, Abergavenny and District Civic Society and campaign group SORE (Save Our Rural Environment).

Concerns over the impact of the development on the setting of the nearby Grade-I-listed St Teilo’s Church have been raised.

But councillors supported a recommendation by planning officers to approve the plans at a meeting on Tuesday.

Speaking in support, Cllr Roger Harris said: “We have been made aware that there are 700 plus households in Abergavenny that are desperate for affordable housing.

“This site is going to be run by a housing association, 100 per cent affordable.”

Cllr Mat Feakins said there is “a significant need” in Monmouthshire for affordable housing.

“There are not many as sustainable locations as Abergavenny, which this site can provide,” he added.

A new footpath connecting the site to other routes, and play space, also form part of the plans.

Councillor Louise Brown said affordable housing is needed, but asked if the designs of the houses could be improved.

“The designs of the houses are more estate-like and I would have thought that possibly a more cottage-style design might have been better,” she said.

But planning officer Andrew Jones said planners were content with the design of the proposed development.

Mr Jones said: “While the development is a technical departure from the Local Development Plan, it would provide much-needed, 100 per cent affordable housing.”

If the Welsh Government decides not to call in the application, the council can issue planning permission in the normal way.

But if it is called-in, it will be decided by Welsh ministers.