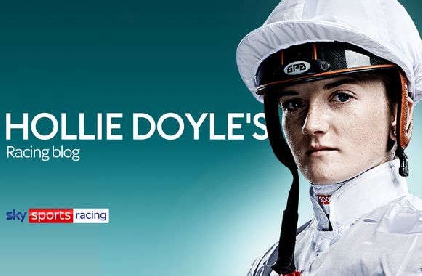 Herefordshire jockey Hollie Doyle is aboard leading Goodwood Cup contender Trueshan on the opening day of the big meeting on Tuesday.

Heavy rain's got me dreaming of glory

The weather gods may not have answered my prayers on Gold Cup day at Royal Ascot but the heavy rain that fell upon the Downs at the weekend has got me dreaming of glory in the Al Shaqab Goodwood Cup (3.35) on the opening day of the Qatar Goodwood Festival on Tuesday.

I'm re-united with my old favourite TRUESHAN, who proved what a class act he is on soft ground when carrying me to that unforgettable victory in the Long Distance Cup on Champions Day last season.

Since Ascot, he's run with huge credit in the Northumberland Plate under a massive weight. The result might not have gone his way, but his trainer Alan King was keen to get a run into him after the disappointment of missing out in the Gold Cup.

He was trained to the minute to run in that great race so I can understand why Alan was keen to take him to Newcastle the following week. That run should ensure that he's cherry ripe but not too fresh for his battle with Stradivarius and Co. in the two-mile showpiece.

John and Thady Gosden's star was behind us on Champions Day when, admittedly, he wasn't at his best, and whilst I would never under-estimate his brilliance the sudden easing of the ground gives me clear hope that we can again get the better of the legendary stayer.

We're nicely drawn in stall two which should help me secure a nice prominent racing position. Alan likes me to sit quite handy which is the way to ride Goodwood. It's a very technical track and you don't want to cause yourself any problems by being too far back.

Trueshan has never run at Goodwood before but he's such a versatile, athletic horse that I can't see any reason why he won't be as effective there as he was at Ascot back in October.

Quinn sprinter has all the right credentials

LORD RIDDIFORD is an exciting ride in the Back To Goodwood Handicap (4.10) over the flying five furlongs on Tuesday.

Malton-based John Quinn's grey won a similar race at this meeting in 2018 and is back on the same mark for a trainer who does well with his long raids south.

The rapid five-year-old doesn't mind ease in the ground, as he proved when running a stormer in the Epsom Dash last month.

He's a classy horse on his day, having won a Listed race on the All-Weather last winter, and I'm happy enough with my draw in stall seven. My lad likes to get on with it which is why this downhill run suits him so well - and my record for John is a perfect one from one!

Sky reaching for the stars

I was really pleased with SISTERS IN THE SKY when I finished fifth on him in a hot novice at Newbury at the beginning of July so I'm sure he has more to offer in the British Stallion Studs EBF Maiden Stakes (4.45) on Tuesday.

Roger Teal's colt gave me a lovely ride that day, leading them into the final furlong before getting run out of it by Richard Hannon's previous winner Bosh and a few other nice types.

He's by Showcasing, so won't mind the easy ground, and has a lot of natural speed which will stand him in good stead on a track like Goodwood.

Glorious to be back at Goodwood

I just love riding at the big festivals and testing myself against the very best so it's great to be in with some nice chances on the opening day of the Qatar Goodwood Festival.

Racing in front of a big crowd now that restrictions have been lifted will make the experience even more special.

My best memory of this meeting was winning a fillies' handicap on Billesden Bess for my old boss Richard Hannon four years ago, when I was still claiming 3lb.

However, winning the Goodwood Cup on Trueshan would be something else. I haven't won a Group race yet this year and to achieve it on him would be the most amazing feeling in the world.