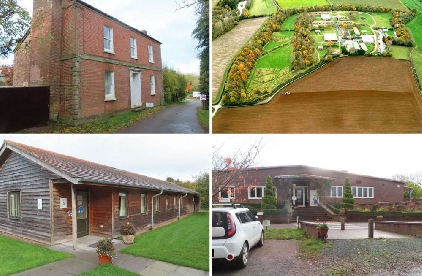 A “historic” Herefordshire farmhouse can now be demolished after a plan to modernise a rural meditation centre was given the go-ahead.

The bid by the Vipassana Trust, owner of the Dhamma Dipa centre near St Owens Cross, west of Ross-on-Wye, was approved by council planners this week, 10 months after the application was submitted.

This will enable the centre to provide 186 single bedrooms, described as “small”, for all students and staff, rather than the current mix of single and shared rooms and dormitories.

Llanwarne and District Group Parish Council said last February it opposed demolition of the farmhouse due to its “historic value and interest to the local community”.

It also raised concerns over the likely impact of demolition and construction traffic on the area’s narrow lanes, and the potential light pollution from the development.

However, neither Historic England nor the council’s own highways department raised objections, nor did Natural England raise concerns over the scheme’s possble impact on the river Wye catchment.

The approval is conditional on the centre providing a travel plan to promote sustainable transport for staff and visitors, and a plan for biodiversity enhancement features on the site.

The centre was established in 1991 on the 22-acre site of a former riding school, and it opened a new two-storey meditation pagoda in summer 2018.

It has also planted hundreds of trees to give privacy to the centre, aid meditation and screen buildings from neighbours.

Although Vipassana meditation was developed by the Buddha, its practice is not limited to Buddhists.

Male and female students and staff are segregated both during the courses and in the accommodation.