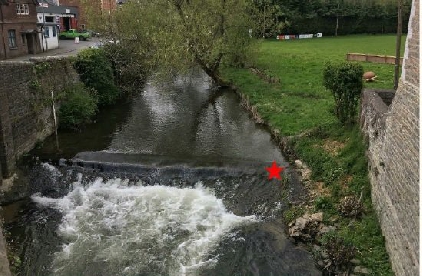 A fish pass is being planned for a weir on the River Teme which flows through Knighton.

The application has been made by Fishtek ltd on behalf of the Severn Rivers Trust, and is part of an ongoing project which is hoped will help Salmon swim up to the  river.

The Trust say that the habitat in the upper reaches of the Teme has the potential to be “very good” as a spawning area for Salmon.

In statements supporting the plans Dr Iain Stewart-Russon of Fishtek explained the proposal.

“The fish pass will be constructed at the northern end of Knighton weir and will require excavation of the existing structure.

“The single flight fish pass will be  from reinforced concrete, metal baffles will be fixed to the base of the channel and will be submerged under all flow conditions.”

Dr Stewart-Russon explained that the weir spans the River Teme in Knighton immediately upstream of the “Teme Bridge” on the A488 by the Kinsley B&B.

The weir is 13 metres wide and is made up of a sloping stone structure, formed of a steep stepped drop in the centre while the two sloping “wing” sections either side are shallower in gradient.

The fish pass would be built on the “true left” of the river, which means the left side coming downstream, and will be accessed from land owned and used by Tref-y-Clawdd (Knighton) rugby club.

Dr Stewart-Russon, said: “The fish pass serves as a Severn Rivers Trust/Natural Resources Wales asset and is not to be used by the public.

“The fish pass creates the hydraulic conditions to allow passage of fish over the existing weir.”

Knighton Town Council discussed and approved of the proposal at their May meeting.

In 2019, residents living near Knighton saw Salmon jumping up the river for the first time in many years,

Surveys by the trust have detected very few salmon there and one the major reasons for this is that the adult fish struggle to get there,

They believe that improving fish passage past barriers further downstream could have really significant positive effect on the local salmon population.