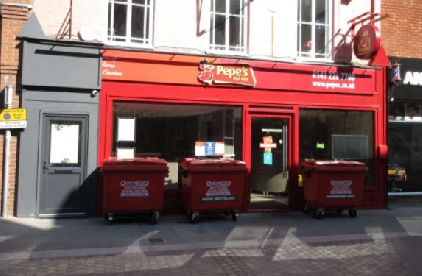 A fast-food chicken restaurant in central Hereford has been allowed to open until 1pm, and 2pm at weekends, despite concerns that the late-night delivery vehicles using the pedestrian zone where it lies are already a risk to revellers.

Pepe’s Piri-Piri, one of several takeaway food outlets on Commercial Street, currently opens until 11pm and serves many customers via delivery, including through app-based services, as well as in person.

Local ward councillor Jeremy Milln, appearing before the council’s licensing sub-committee as a member of the public, said such deliveries “cause issues of public safety and nuisance every evening”, while parking and traffic offences cannot be enforced after 9pm as enforcement officers do not regard it as safe.

He added: “Delivery vehicles in the pedestrianised zone present an increased hazard the later they continue, as more and more people, many of them intoxicated, move onto the streets when the pubs and bars close.”

For the applicant, Mohammed Malik said the restaurant had bought two electric mopeds and was asking customers to order directly rather than via apps, which would help it ensure drivers followed the pedestrian zone code.

Explaining the committee’s decision, chair Coun Alan Seldon said: “We found it difficult to relate the traffic issues specifically to the applicant’s premises, which is near other similar premises open till much later.”