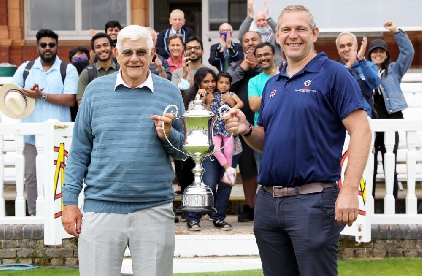 The captain of a Herefordshire cricket club has been able to finally celebrate the experience of winning a national title at the home of cricket with his father after losing the original opportunity due to coronavirus.

James captained the side to their first ever national success in September 2020, claiming a six-run win at Lord's over Hertfordshire side Redbourn CC.

However, due to social distancing restrictions required due to the coronavirus pandemic, Colwall were unable to celebrate the victory with friends and family at the ground at the time.

This meant James' father Keith, who had coached him growing up and had travelled with his son as he played all over the country, was unable to attend the match.

James' wife Sharon Morris devised a plan to belatedly celebrate the achievement, liaising with the owners of Lord's, the Marylebone Cricket Club, to arrange for a surprise shoot to allow James and his father to capture those memories.

The pair were surprised during a tour of the ground which had been arranged to allow for James to handover the Voneus Village Cup trophy and celebrate Keith's 80th birthday.

Sharon said: "Because of the circumstances last year, no one could go [to the final] and the one person James would have liked to be there was his dad.

"He kept on saying it all year and I was thinking 'what can I do?' Then the cup needed to be returned and with time running out, I phoned Lord's and it escalated from there really.

"He brought it away from Lord's to Colwall last year and he's the one that returned the cup; it's nice he was the last person to have his hands on it.

"All he's ever wanted to do in his cricketing career is play at Lord's, so it's the biggest dream come true and to go twice was amazing."

After handing the trophy over, the pair were surprised with the cup in the Long Room of Lord's, giving him the opportunity to take his missing photos.

Despite everyone at the club as well as his own father being aware of the plan, James remained completely unaware until the last second, going as far as to try and arrange a photoshoot of his own.

He said: "It was a wonderful surprise. It was the biggest disappointment of the final, but it turned out to be a wonderful experience and one me and my dad will cherish forever.

"Whilst I would have liked the spectators there, a Covid final will probably never happen again and only 14 of us from Colwall will know what it felt like to be treated like England players for the day. That's quite a special bond.

"I'm just hopeful that before I pack in, we'll be able to get back to Lord's with spectators and experience both sides of the coin.

"I've got to get some decent Christmas presents for Sharon now, haven't I?"