Council plans to go ahead with recycling centre closure despite protest 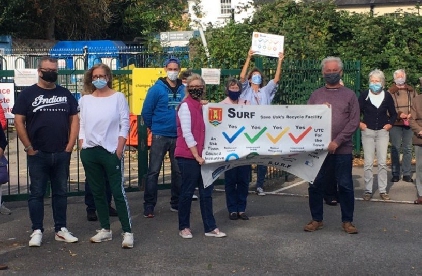 Monmouthshire County Council is proposing to move ahead with the closure of Usk recycling centre – despite opposition from residents in the town who have held a protest against the plan.

The closure is one several measures being put forward to improve the county’s recycling rate and save money.

Other proposals include closing the Five Lanes and Llanfoist tips for an additional day per week, revising opening hours to 8am to 4pm and to continue with a booking system at all sites.

But the closure of the Usk centre is the most contentious proposal, with around 1,800 people signing a petition against the plan, a protest held at the weekend and an action group called Save Usk’s Recycle Facility (SURF) set up.

Mayor of Usk Chris Wilkinson said the campaign to save the centre has received “massive support” from people who have “relied heavily on being able to take their recycling to the site”.

Usk Town Council has submitted a report to the county council outlining why the site should stay open, with its proposals to improve the centre’s recycling rate.

Its proposals include removing the black bag facility if necessary, changing its opening hours and re-introducing a larger electrical disposal facility.

“There is an ageing population in Usk and the surrounding villages,” said SURF campaigner Jan Keelan.

“Many of the older residents are unable to drive to the other sites, meaning they will be unable to dispose of items that cannot be left for kerbside collections.”

The county has the most-expensive Household Waste and Recycling Centre (HWRC) service in Wales – yet its centres have the lowest recycling rates, it says.

The council also says it would be “impossible” to introduce black bag sorting in Usk due to the size of the site.

A review raised concerns over drainage and health and safety at the site.

A council report says the centre is “highly regarded by a large number of local residents”.

But it adds: “Perceived negative impacts on the community of Usk would be offset with improved air quality, additional parking close to the high street for businesses and improved recycling rates across the county.”

The council’s strong communities select committee will consider the report next Monday, ahead of a decision by the cabinet next month.