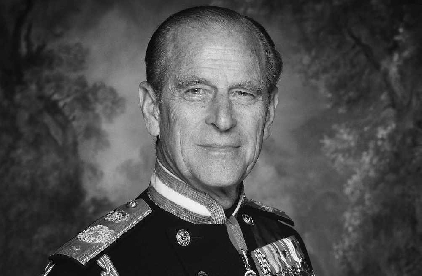 Leaders across Herefordshire and Shropshire have paid tribute to the passing of HRH The Duke of Edinburgh.

Her Majesty’s Lord-Lieutenant of Shropshire Anna Turner said: “I am sure I speak for the people of Shropshire in expressing the huge sadness on the death of H.R.H The Duke of Edinburgh. We remember him with affection and gratitude for his support to the Queen, his sense of fun and his dedication to duty.

“Many young people are especially thankful for his initiation of the Duke of Edinburgh Award Scheme and his work with wildlife, sport and the Armed Forces.

“We shall miss him, and offer our greatest sympathy to The Queen and the Royal Family on their loss of a much-loved husband, father, grandfather and friend.”

“The Union Jack flag will be flown at half-mast at Shirehall from today, until 8am on the day following the funeral.”

Peter Nutting, Leader of Shropshire Council, said: “I am profoundly saddened by the news of the death of H.R.H The Duke of Edinburgh. On behalf of everyone at Shropshire Council, I wish to convey our deepest sympathy to the Royal Family. I know the people of Shropshire will join us in mourning and offer their sincere condolences during this time. I am sure we will all be looking for our own way to remember and reflect on his life.”

Andy Begley, Shropshire Council’s chief executive, added: “It is with great sadness that we hear of the death of H.R.H The Duke of Edinburgh. There is no doubt that his devotion to H.M The Queen was an enduring source of strength and comfort. I would like to offer my deepest condolences to all members of the Royal Family.

Statement on behalf of Claire Ward, Clerk to the Lieutenancy of Herefordshire: “The councillors and officers of Herefordshire Council are deeply saddened at the news of the death of His Royal Highness Prince Philip, The Duke of Edinburgh.

“Our thoughts are with the Royal Family at this time.”

Statement on behalf of Her Majesty’s Lord Lieutenant, Edward Harley OBE: “I am very sad to hear the news regarding His Royal Highness The Duke of Edinburgh.

“HRH has been a pillar of strength to The Monarchy, dedicating his life to supporting Her Majesty The Queen in her duties.

“The Duke of Edinburgh’s Award, which has offered opportunities to thousands of young people, is just one of his many lasting legacies.

“HRH has been a hugely positive and encouraging influence in so many fields.

“My thoughts are with Her Majesty and all the members of The Royal Family at this very sad time.”

Statement on behalf of Councillor Sebastian Bowen, Chairman of Herefordshire Council: “It is with great sadness that we observe the passing of HRH The Duke of Edinburgh. Our thoughts are with the Royal Family at this sad time. The flags across the county are being flown at half-mast as a sign of our greatest respect, and there will be books of remembrance located throughout Herefordshire to commemorate and celebrate fond memories of Prince Philip throughout his life.

“We first welcomed The Duke of Edinburgh to Herefordshire in 1957 when he accompanied the Queen on her first visit to the county as Queen and they have both visited us on several occasions since then. The last occasion was their visit on 11 July 2012 during Her Majesty’s celebration of her Diamond Jubilee, which will be a permanent memory for the people of Herefordshire. The Duke has always been such a marvellous consort to the Queen throughout the decades, helping to make the world envious of the British monarchy, which is without equal.

“The Duke of Edinburgh, when a young Naval Officer stationed on Malta was introduced to Polo by Lord Mountbatten, who was a great exponent of the game and wrote a classic manual on Polo. The Duke became a fine player with a very good handicap of four. He was a member of many winning teams. After Polo, the Duke took up Carriage Driving, very successfully. He was skilled, brave and very determined and won many Championships and represented Great Britain. He drove a team of the Queen's ponies to many successes. His enthusiastic participation greatly raised the profile of Carriage Driving.

“We owe The Duke a great debt of gratitude for the way he dedicated his life to be at the Queen’s side at thousands of visits in their service of our country and the whole of the Commonwealth. The way he supported the nation’s young people mature into responsible adulthood through his innovative Duke of Edinburgh’s Award Scheme was a marvellous inspiration for many young people.  I know that The Duke of Edinburgh Scheme has changed, greatly for the better, the lives of thousands of young people and taught them to believe in themselves and to learn that serving other people is the greater glory.

“He will be sorely missed, not only by the Royal family and his friends, but also by the nation as a whole.”

"The Duke Of Edinburgh has touched the lives of many throughout his lifetime, not only playing a significant role as a member of the Royal Family but through his passion as an environmentalist and Patron of The Duke of Edinburgh scheme. We honour his dedication to public life and his undeniable commitment to supporting Her Majesty The Queen over many decades. His loss will be deeply felt across the United Kingdom and the Commonwealth."

In a display of mourning and respect, all of Monmouthshire County Council's flags have been lowered to half-mast and books of condolence will be opened at Monmouthshire's Community Hubs on Monday 12th of April and will remain open until the funeral of His Royal Highness."