Claims Much Wenlock is being ‘sacrificed’ over Ironbridge Power Station development 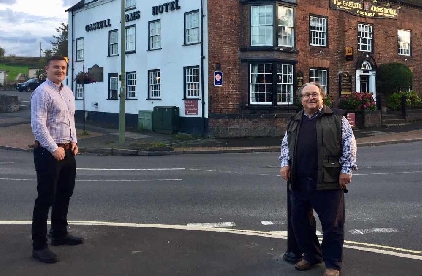 A recommendation that plans for 1,000 houses on the former Ironbridge Power Station site should be approved next week has been met with “horror”.

Councillors representing Much Wenlock say the development will push the town’s existing traffic problems to breaking point – and have called on Shropshire Council’s southern planning committee to reject the scheme.

The proposals by Harworth Group to redevelop the 340-acre site will be discussed by the committee next week, and a report published ahead of the meeting by planning officers say outline planning permission should be granted.

Much Wenlock Town Council said it was “horrified” at the prospect of hundreds of additional vehicles travelling through the town each day.

The council said in a statement: “These vehicles will massively worsen the problem of rat-running through the ancient medieval town and cause even worse congestion at that well-known pinch-point, the Gaskell Corner.

“Despite this, the developer has provided no acceptable highway improvements that might help to reduce this devastating impact.

“Much Wenlock, the famous ‘Jewel in Shropshire’s Crown’ is being sacrificed merely in order to facilitate redevelopment of the Power Station site.”

Mayor Dan Thomas, who also represents Much Wenlock division on Shropshire Council, said the developer had failed to properly assess the impact of the additional traffic on the town.

Councillor Thomas said: “Much Wenlock Town Council’s professional transport adviser has told us that in his 40 years of experience he has never come across a worse case of a developer failing to properly address the impact that their development will have on the local environment.

“The developer has failed to properly analyse the Gaskell Corner junction. It is their responsibility to provide an improvement scheme that will accommodate all their additional traffic.

“They have followed this standard procedure everywhere else on the road network, but in Much Wenlock they offered a half-baked, untested scheme, which was quite rightly flatly rejected by Shropshire Council and now they’ve just walked away offering no improvements whatsoever.

“This is completely unacceptable to the people of Much Wenlock and we want to make our voices heard before Shropshire councillors vote on the scheme.’

“We call on the Shropshire planning committee to do their duty and protect the people and the town of Much Wenlock from the damage and destruction that this development will bring, unless the developer provides an acceptable solution.”

These concerns have been echoed by Councillor Thomas’s predecessor David Turner, who represented the town on Shropshire Council until last month and was vice chairman of the southern planning committee.

Mr Turner said there was an “apparent unwillingness” by the developer to “look at the wider implications of traffic heading through Much Wenlock”.

He said it was concerning that no mitigation scheme was being put forward to address the inevitable traffic chaos at the Gaskell Arms junction, which he said was already a major problem at peak times.

Mr Turner said: “This has many impacts, amongst them rat-running through the town’s narrow streets, some of which have no footway where pedestrians can seek safety, and others where vehicles large and small mount the pavement when confronted with opposing traffic.

“The applicant has submitted no acceptable proposals to improve the Gaskell Arms junction, nor have they submitted any plans to prevent the traffic rat-running through the town.

“By the applicant’s own admission, wait times at this five-ways junction will double.

“There appears to be an expectation that the situation will be ‘self-regulating’, i.e. motorists will seek an alternative route to avoid hold-ups. This will exacerbate the propensity to seek alternative routes.”

Mr Turner also said the extra vehicle movements by rat-running traffic would cause further deterioration to country lanes, adding: “The current proposals pay no regard to these concerns and there appears to be no demand from Shropshire Council for them to be considered.

“The impact on local residents’ quality of life cannot be over-emphasised.

“I urge the committee to consider my concerns alongside others and to refuse the mixed-use application until a sensible and costed solution is found for all of the highways impacts that will arise from additional traffic.”

The report to the committee sets out contributions totalling £16.75 million the developer will be required to make towards local infrastructure if the plans are approved, on things like highway improvements and additional school capacity.

It includes £250,000 to be transferred to Shropshire Council towards improvements at the Gaskell Arms junction, but does not say what the work might involve.

The report says: “Harworth’s highway consultant initially recommended signalisation for the Gaskell Arms junction at Much Wenlock but this was not supported by the Shropshire highway authority.

“The company has agreed instead that equivalent funding should be ring fenced for use in a comprehensive improvement scheme for the junction incorporating additional funding anticipated from other sources.

“The details of this scheme will be confirmed following stakeholder engagement exercise.

“It will be some time before traffic from the proposed development begins to have any material impact at the junction, during which time details of the scheme can be finalised.”

The plans for the power station site include a retirement village, primary school, shops, business sites and leisure and sport facilities, creating what will effectively become a new town.

The southern planning committee will meet at Theatre Severn next Tuesday to decide the application.