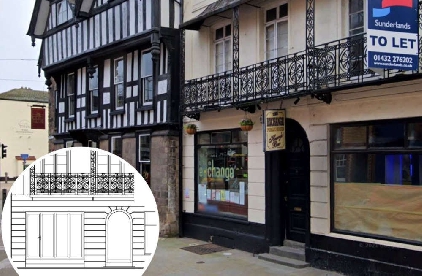 A pub in Hereford city centre is to get a revamp and part of its upstairs converted into student accommodation.

The Exchange on Widemarsh Street changed hands last October with the promise of a refurbishment under its new owner. It appears to have been closed since.

In newly submitted plans, the current display window to the front is to be replaced by folding doors, accessible via steps from the street, as the current door is.

Beyond the main bar, the ceiling of the former pool room will be sound- and fire-proofed to enable it to host discos while insulating it from the proposed single-room studio flat above.

Also on the first floor, a new office pub kitchen with extraction vent will be added, while the function room will be retained.

The five proposed student bedsits in the upper two floors would have a shared kitchen, bathroom and two toilets.

The building also needs work to the ornate first-floor balcony as well as to the roof, chimneys and gutters, the application says.

As the early 19th-century building housing the pub and its two neighbours is grade II listed, listed building consent is also required for the change.

“While the proposed work is a relatively significant intervention necessary in creating an essential uplift of this public house in its current dilapidated condition, it does not interfere with the essence of the [neighbouring] historic structures, and actively preserves their structural integrity,” the application says.

Comments on the application, numbered 221817 (planning permission) and 221818 (listed building consent), can be made until July 28.