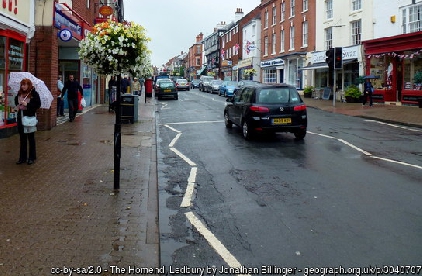 Herefordshire councillors are expected to debate proposals on Friday to set aside cash to repair the road network in the county’s market towns.

The motions are being put forward by Ross East ward councillor Paul Symonds, who says there is public anger over the state of the street scene in his town.

He wants an extra £1m to be invested in maintaining the public realm in Bromyard, Ledbury, Leominster, Kington and Ross.

The town council unanimously backed these proposals on Monday night and noted its concern with the dire state of highways in the market town and frustration over this neglect.

“This council therefore fully supports two motions, which have been submitted for the Herefordshire Council meeting on February 14.”

The first motion is to ringfence 15% of the annual highway maintenance revenue budget to be spent on the highway network in the market towns.

And the second motion is that an extra £1m per year capital is invested in market towns public realm maintenance and improvement during the next three financial years.

“As towns we desperately need some of these repairs done.

“The Homend is getting really bad and is in urgent need of resurfacing.”

Bromyard Bringsty councillor Nigel Shaw said he was broadly in favour of the idea however he said motions aren’t binding.

“Lots of money has been spent in Hereford on roads and that is at the expense of market towns and the rural hinterland,” he said.