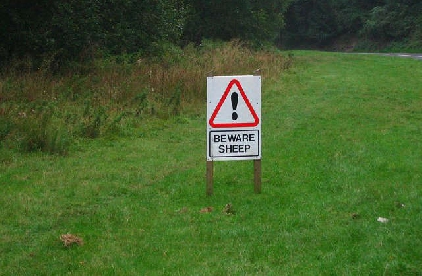 © Copyright Richard Webb and licensed for reuse under this Creative Commons Licence.

Dog owners who visit or live in the Forest of Dean are being encouraged to keep their pets on a lead in a bid to stem the rise in attacks on free roaming sheep.

The running of sheep through public land is a Forest tradition dating back more than 800 years.

But members of the sheep liaison group are concerned over the rise in dog ownership during lockdown and how poorly trained canines can cause havoc to livestock and wild animals if not kept under control.

The liaison group is made up by representatives from the Commoners’ Association, Forestry England, the Forest District Council, Gloucestershire County Council and the police.

Some 20 sheep have been killed in the Forest over recent months due to dog attacks and road accidents, according to the commoners.

And liaison group chairman Clare Greaves wants to educate the public about the dangers untrained dogs pose to livestock and other animals.

“There are times of the year when it’s irresponsible for a dog owner to let their pet off a lead.

“A responsible dog owner who follows the rules reduces the likelihood of a problem happening.

“We want to educate people about what their duties and responsibilities are in terms of dog ownership.

“It’s a catastrophe if your dog is not insured, trained and does not have a microchip and something happens.

“Before anyone lets their dog go off the lead in the Forest, they need to remember that sheep are sweet and gentle animals that are very vulnerable in late pregnancy and at lambing time.

“Before they unleash their dogs, people need to be absolutely confident that their dog is well enough trained around livestock.

“Even if the dog doesn’t draw blood. The chasing of the sheep is enough to cause abortion.

“The consequences are horrific.

“We want to remind people who have bought a puppy during the pandemic who have not had the opportunity to go to puppy training classes that there is training available.”

She said people who do not know where or how to train their dogs should approach the Association of Pet Dog Trainers to find a trainer.

“That will enable them to fulfil their duty to ensure their dog has appropriate training.

Forest of Dean bylaws also say no person should allow a dog to disturb, worry or chase any animal.

Commoners’ Association general secretary Mick Holder said he would like Forestry England do more to enforce these bylaws.

“That would take care of a bucket full of our problems and it would also minimise suffering,” he said.

And county councillor Terry Hale (Drybrook and Lydbrook, Con), who is also a member of the liaison group, believes all dog walkers should keep their pets on a lead while in the Forest.

“It’s got to come. I’d like to see that people have to have a licence and insurance for their dogs.”

Anyone who sees a sheep being attacked or dead in the Forest of Dean should call Mr Holder on 01594 827485.

Forestry England has been approached for a comment but none was provided at the time of going to press.