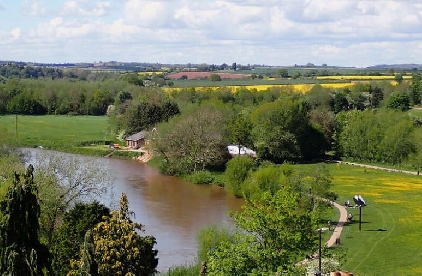 © Copyright Rob Farrow and licensed for reuse under this Creative Commons Licence.

A bid has been launched for the river Wye to be given official bathing water status, to help ensure it is given resources to improve its water quality.

A Ross-on-Wye town council meeting earlier this month approved a motion, “to call on Herefordshire Council urgently to investigate seeking designation of appropriate stretches of the Wye to be officially identified as bathing water”.

The government allows a beach or inland water to be officially identified as a bathing water if it can be shown to already in use and has facilities to enable this.

If successful, the Environment Agency must then put plans in place to monitor and protect it. The local authority would also have to display information about the water quality during the bathing season of mid-May to the end of September.

Town councillor Jane Roberts, who proposed the bid, said: “This would add to the armoury that Herefordshire Council can use to raise the water quality of the Wye.

“If that doesn’t work, we as the town council could seek it for the stretch of the river passing through Ross.”

Britain’s bathing water designations are nearly all for coastal waters, but in Europe they are used much more for rivers, which as a result have higher water quality standards, she said.

However the West Yorkshire town of Ilkley was granted bathing water status for a stretch of the river Wharfe earlier this year, putting pressure on Yorkshire Water to reduce sewage discharges.

The parish council motion has been passed to Hereford City Council and other towns in the Wye valley to ask them to support the bid.

It also calls on Ross residents to sign a petition asking the English and Welsh governments to double the Environment Agency’s and Natural Resources Wales’s budgets so that they can better enforce existing legal protections for rivers.