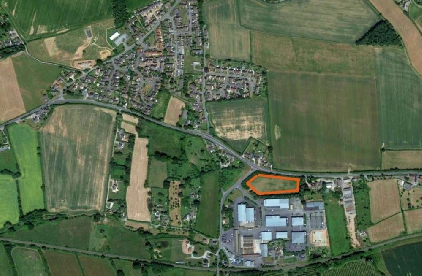 Plans have been unveiled for an estate of 36 houses, 11 of them affordable, by a village near Hereford.

They would be built on a 1.4-hectare field surrounded by trees beside the A4103 Hereford to Worcester road between the Whitestone Business Park and the village of Withington.

The split among the affordable homes, which would look no different, would be six two-bedroom, four three-bedroom and one with five bedrooms.

The scheme would include 80 parking spaces around the single cul-de-sac layout.

The houses would be highly insulated with high performance glazing, it added.

An engineer’s report said the site was “at a low risk of flooding” and that planning permission “should not be withheld” on this basis.

But it pointed out the site is within the impact risk zone of the River Lugg SSSI (Site of Special Scientific Interest), and that Herefordshire Council may be required to carry out an assessment on the development’s likely impact on this.

Agent for the developer RCA Regeneration said the proposed scheme “would be built out quickly” and would be in line with local and national planning policy.

The services and facilities of Withington “could be reached by walking” from the site, it would have regular bus services to Hereford, while the adjacent business park would provide “a significant number of job opportunities”, it said.

RCA added that it twice wrote to Withington Parish Council requesting a meeting to discuss the proposals and offering to attend a parish meeting, but “did not receive a response”.

Eleven of the 19 responses also disagreed with the inclusion of affordable homes.

The planning application can be commented on until 4 November, with a decision on whether it can go ahead due by early January.

A previous permission to build 80 “extra care” apartments on the field lapsed in 2018.