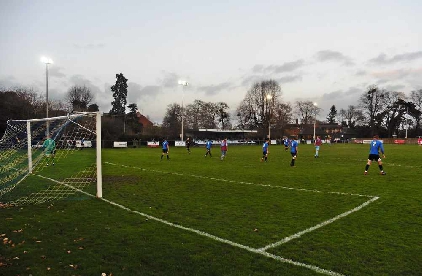 Westfields entertained Fairford Town on Saturday at allpay.park and came out on top in a 9 goal thriller.

Westfields came back after twice being 2 goals down to win 5-4 in a dramatic end to the game when they scored 3 goals in the last 10 minutes to register their 3rd consecutive Hellenic League win and hoist them up into 7th position ready to take on Cribbs on Tuesday night.

It was the 2nd consecutive Saturday that Westfields had scored 5 goals at allpay.park and the game was settled by 17 year old Man of the Match Cawley Cox who scored a dramatic 90th minute winner and also had a hand in the other late goals as he came on as an 80th minute substitute for striker Richard Greaves.

Westfields had found themselves trailing 2-0 in the first 15 minutes when Jack Beardswell put the visitors ahead in only the 3rd minute when he seized on a defensive lapse by Westfields to shoot low past Ian Havard and then in the 15th minute Ross Langworthy took a similar opportunity to put the visitors into a commanding 2-0 lead.

However, Westfields came storming back and Josh Hunt pulled a goal back in the 17th minute and then twin striker Richard Greaves added a 2nd for Westfields to put the sides level with only 20 minutes on the clock.

However, just before half time Fairford Town skipper Robbie James was on hand at the far post to tuck away a chance after a left-wing corner was not cleared by Westfields.

After the break, and trailing 3-2, Westfields were again in trouble when in the 57th minute George Peare rose to powerfully head home a right-wing corner to put Fairford Town into a commanding 4-2 lead.

Westfields then came storming back and had a number of opportunities but found the visitors’ keeper Sam Ayres in tremendous form as he saved really well from point-blank range from Dan Stoneman and then from Josh Hunt.

However, Phil Glover the manager then made 2 substitutions as teenagers Cawley Cox and Max Coley were brought into the fray and Cox made an immediate impact when he was brought down in the penalty area in the 84th minute and Josh Hunt converted the spot kick to put Westfields back in the game at 4-3.

Westfields threw everything forward and Cox then laid on a chance for his fellow teenage colleague Harrison Summers who fired low into the corner of the net to put Westfields level at 4-4.

Westfields then again threw everything forward in an effort to win the game and in a dramatic finish Cawley Cox got onto the end of a right-wing cross and tucked away a superb opportunity at the near post to put Westfields into a 5-4 lead in the 90th minute.

The referee played an agonising 7 minutes injury time in which time skipper Kane Kahaki twice made brilliant clearances and Ian Havard also hung onto one late free kick to take the pressure off the Westfields defence.

Westfields worked hard to come back from being 2-0 down and then 4-2 down to win 5-4 and hoist themselves up into 7th spot in the league table with this exciting end-to-end action-packed 9 goal thriller.

On Tuesday Westfields now meet second in the table Cribbs, kick-off 7.45pm, at allpay.park and next Saturday Westfields travel to Royal Wootton Bassett for an away game in the Hellenic League Premier Division.

The following Tuesday, 5th October, Westfields are at home to Longlevens, again kick-off 7.45pm, at allpay.park