25-home village bid is back 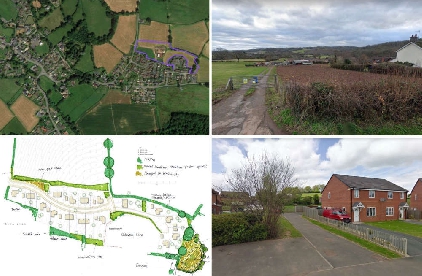 Up to 25 houses could be built by a Herefordshire village if a new plan is approved.

The bid by Gary Gittings is for outline permission for a linear development on 2.2 hectares of farmland to the east of Ewyas Harold, in the Golden Valley, adjoining the settlement boundary.

Ten of the 25 would be for “social, affordable or intermediate rent”, the rest for open-market sale. The number of bedrooms is yet to be determined, though an indicative plan shows a mixture of detached, semi-detached and terraced houses.

Each would have two car parking spaces. The houses would be plumbed into an existing sewage station to the southeast, while surface water would be dealt with by a sustainable drainage system.

A previous bid last year to develop the site was withdrawn due to issues with access on foot between the development and the village, a concern raised by the village parish council.

“These issues have now been overcome by virtue of a direct pedestrian access into the adjoining Oakbrook Close, and thereby connecting this site to the remainder of the village,” the current application says.

The earlier plan drew seven letters of objection locally, and one of support.

Comments on the resubmitted application, numbered 221876, can be made until July 18.