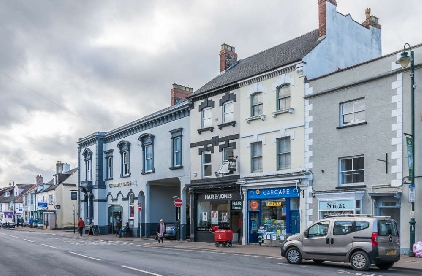 © Copyright Ian Capper and licensed for reuse under this Creative Commons Licence.

An £11 million bid has been made to the UK Government to redevelop parts of Monmouth town centre and improve some of the town’s Grade II listed buildings.

The plans include the approved proposal to move Monmouth Museum into Shire Hall and to use Market Hall as an “undercover indoor market,” co-working and retail space. There would also be a redevelopment of Monnow Street and Blestium Street to make the area more “green” and pedestrian friendly.

The UK Government has set aside £4.8 billion for its Levelling Up Fund, up to 2024/25, which will be available for all areas of the UK to “invest in infrastructure that improves everyday life”.

Monmouthshire council has bid £11.1 million from the fund – the maximum a local authority can request is £20 million.

However, at least 10 per cent has to be funded by other means and the county council confirmed in their bid that £1.2 million would be provided in council funding and £749,000 in other grant funding.

This brings the total cost of the works to just over £13 million.

Under the plans for Monnow Street and Blestium Street, around £9 million would be invested to  create a visitor centre, cafe and green space.

Of this, £7.8 million has been bid for by the county council via the Levelling Up Fund and £1.4 million would be provided via match funding.

This project is also known as the Monmouth Gateway and aims to make the town a “more attractive space for visitors, businesses and residents”.

Aside from the visitors’ centre and cafe, there will also be pavement widening along Monnow Street and Blestium Street. This will allow more “pedestrian space and room for businesses to expand with street-based offers”.

The application says: “The narrowed carriageway will slow traffic and support cycling.

“The Blestium Street space will be enhanced through greening, including trees to create a better place for visitors, markets, and events.”

The plans for Shire Hall were approved by Monmouthshire council’s cabinet earlier this year.

It would see the relocation of Monmouth Museum to the building, along with better facilities and a retail offer.

The council has bid for £2.9 million as part of the Levelling Up Fund and £517,000 would be provided via match funding.

The application says: “The investment will revitalise an existing underutilised public building to develop an enhanced cultural offer and community space.

It will house an “integrated community cultural facility and visitor attraction”.

As part of the plans a learning hub would be created, which will partner formal educational providers, local business leaders and entrepreneurs.

The relocation of Monmouth Museum to Shire Hall allows the space at Market Hall to be redeveloped.

Under the plans, Market Hall would benefit from a co-working retail space, which would link to the improvement works at Monnow Street.

This is the smallest part of the bid, with the council only requesting £419,000. Third party funding of £74,885 has already been received for the project.

The aim of the Market Hall plans is to support new ways of working by “providing space for start-ups, retail, agile working, and meeting facilities”.

The application says: “It could also provide community space through market space for traders or local food and drink providers.”

The funding would be spent on internal changes and structural improvements to support the change of use to an undercover indoor market area and co-working space.

The application says: “The proposals at Market Hall involve the delivery of commercial space creating opportunities for small ‘start-up’ retail companies to trade flexibly and individuals to come together in an innovative coworking environment.”