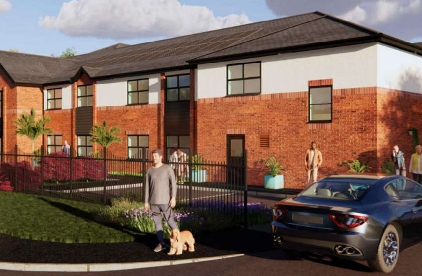 A 66-bed care home for older people in a Gloucestershire town has been given permission to be built despite concerns over road safety for schoolchildren.

LNT Care Developments applied to Forest of Dean District Council for permission to demolish the buildings at the Fairtide Centre in Naas Lane, Lydney, and redevelop the site.

The company has developed around 130 care homes across England since 2005 and they say the new site in the Forest of Dean will help meet local growing need in the future.

They said the scheme will create around 50 jobs and the care home has been sympathetically designed to fit in with the surrounding area.

Speaking at today’s planning committee meeting (September 14), Jo Kemp, senior planning manager at LNT Group, said: “We hope the building will assimilate well into the area continuing the site’s history as a community use.

“The design of the proposed home reflects both the nature of its use and its surroundings and would be built using local materials.

“Residents will not have cars and although there will be 24 members of staff on site they will generally come from a three-mile radius from the site.”

She said most visitors would go to the site in the evenings when there are less staff on site and more parking spaces available.

But residents and representatives from the nearby Severnbanks Primary School had raised concerns over pupil safety, increased traffic and potential road hazards.

Carol Morgan, of Severnbanks Primary School, said: “The road outside the school and Fairtide Centre can get extremely busy during school opening and closing times, increased traffic could pose and issue, (especially large construction vehicles during these times), we need to safeguard our users from any potential incidents.”

Sally Thomas-Brown, an objector, had called for a 20mph speed limit for the whole of Naas Lane, traffic calming measures and for the road to be resurfaced as a planning condition for the scheme.

And Rosalyn Hart, another resident, said: “It will make it more dangerous for the kids coming out of school with the increase in traffic and with people double parking outside the school.”

Gloucestershire County Council highways officers did not object to the scheme which they said would not have an unacceptable impact on road safety nor a severe impact on congestion.

However, the adult social care service at Shire Hall did not support the proposals as they said it would provide over and above the beds that are needed.

The planning committee voted unanimously in favour of the proposals.